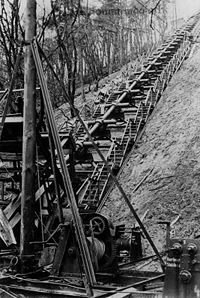 The V-3 (Vergeltungswaffe 3) was a German World War II supergun working on the multi-charge principle whereby secondary propellant charges are fired to add velocity to a projectile.
The weapon was planned to be used to bombard London from two large bunkers in the Pas-de-Calais region of northern France, which were rendered unusable by Allied bombing raids before completion. Two similar guns were used to bombard the country of Luxembourg from December 1944 to February 1945.
The basic construction was later taken up in the U.S. and Canada by developments like Project HARP in the 1960s.
The V-3 was also known as the Hochdruckpumpe ("High Pressure Pump", HDP for short), which was a code name intended to hide the real purpose of the project. It was also known as Fleissiges Lieschen ("Busy Lizzie") 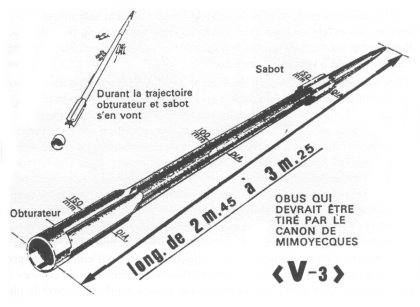 The gun used multiple propellant charges placed along the barrel's length and timed to fire as soon as the projectile passed them, to provide an additional boost. Because of their greater suitability and ease of use, solid-fuel rocket boosters were used instead of explosive charges. These were arranged in symmetrical pairs along the length of the barrel, angled to project their thrust against the base of the projectile as it passed. This layout spawned the German codename Tausendfüßler ("millipede"). Unlike conventional rifled weapons of the day, the smoothbore gun fired a fin-stabilized shell, dependent upon aerodynamic rather than gyroscopic forces to prevent tumbling, which resulted in a lower drag coefficient. 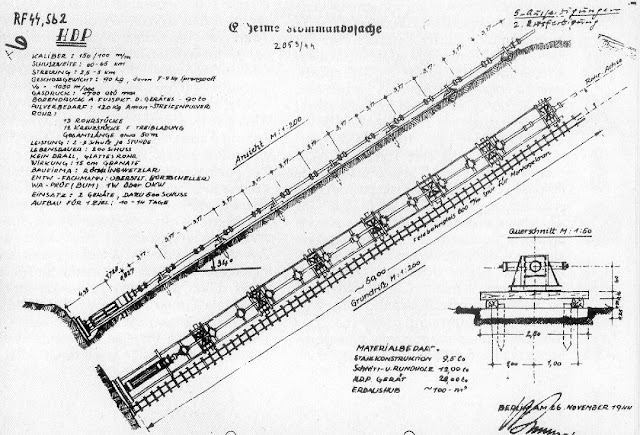 In 1943, German engineer August Cönders, of Röchling Stahlwerk AG, proposed an electrically initiated multiple-charge weapon. Thanks to the success of Cönders's other projects, including the "Röchling shell", major figures in the Nazi establishment took notice of him, most importantly Albert Speer, the Minister of Munitions.
Cönders was ordered to produce a prototype of the Hochdruckpumpe ("high-pressure-pump") and duly constructed one in 20 mm calibre, which proved satisfactory. At this point, Adolf Hitler, who had been following the project with interest, took a hand and decided that a battery of 50 full-size guns would be sited in northern France for bombarding London.
Cönders had constructed a full-calibre gun at the Hillersleben proving ground near Magdeburg, but by the end of 1943 he had encountered severe problems both in putting the gun's basic principle into operation and in producing a feasible design for the shells it was to fire. Even when everything worked, the muzzle velocity was just over 1,000 metres per second (3,300 ft/s), which was nowhere near what had been promised. Nonetheless, plans were proposed to build a single full-size gun with a 150-metre (490 ft) barrel at Misdroy on the Baltic island of Wolin, near Peenemünde, while construction at the Mimoyecques site in France (which had already been attacked by the USAAF and the RAF) went ahead. By March 1944, with no good news from Misdroy, the Heereswaffenamt (Weapon Procurement Office) took control of the project, and Cönders became one of the engineers working on the three chief problems: projectile design, obturation, and ignition of the secondary charges.
Six different companies, including Krupp and Skoda, produced satisfactory designs for projectiles. Obturation problems were solved by placing a sealing piston between the projectile and the initial propellant charge, which in turn prevented the flash from the charge from getting ahead of the projectile and solved the problem of controlling the initiation of the secondary charges. By the end of May 1944, there were four designs for the 150-mm finned projectile, one manufactured by Fasterstoff (designed by Füstenberg), and three others by Röchling (Cönders), Bochumer (Verein-Haack), and Witkowitz (Athem).
Trials were held at Misdroy from May 20–24, 1944 with ranges of up to 88 km (55 mi) being attained. On July 4, 1944, the Misdroy gun was test-fired with 8 rounds (one of the 1.8 m (5.9 ft) long shells travelled 93 km (58 mi)). The gun burst during the testing, putting an end to the tests. 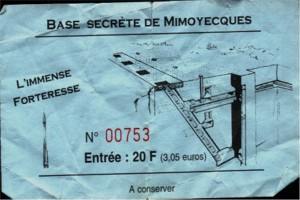 Following Hitler's decision that HDP guns be sited in northern France to bombard London, the task of finding a suitable site for the HDP batteries was given to Major Bock of Festung Pioneer-Stab 27, the fortification regiment of LVII Corps, Fifteenth Army, at the time based in the Dieppe area. A study in early 1943 concluded that a hill with a rock core would be most suitable, as the gun tubes could be placed in drifts (inclined tunnels) and support equipment and supplies located in adjacent tunnels. The guns would not be movable, and would be permanently aimed at London.
A suitable site was selected at a limestone hill about 5 kilometres (3.1 mi) north of the Hidrequent quarries, near Mimoyecques in the Pas-de-Calais region of northern France behind Cap Gris Nez, very close to the French end of the present day Channel tunnel, where V-1 and V-2 launch sites were already under construction. The site was 8 kilometres (5.0 mi) from the sea and 165 kilometres (103 mi) from London. Codenamed Wiese (meadow) and Bauvorhaben 711 (Construction Project 711), Organisation Todt began construction in September 1943 with the building of railway lines to support the work, and began to excavate the gun shafts in October. The initial layout comprised two parallel facilities approximately 1,000 metres (3,300 ft) apart, each with five drifts which were to hold a stacked cluster of five HDP gun tubes, for a total of 50 guns. Both facilities were served by an underground railway tunnel and underground ammunition storage galleries.

The eastern complex consisted of five drifts angled at 50 degrees reaching 105 metres (344 ft) below the hilltop. The five drifts exited the hilltop through a concrete slab 30 metres (98 ft) wide and 5.5 metres (18 ft) thick. Large steel plates protected the five openings and each drift had a special armoured door. Extensive tunnels and elevator shafts supported the guns, and had the site become operational about 1,000 troops from Artillerie Abteilung 705 and supporting units would have been deployed at Mimoyecques. Artillerie Abteilung 705 had been organised in January 1944 under Oberstleutnant Georg Borttscheller to operate the Wiese gun complex.
The plans were to have the first battery of five gun tubes ready for March 1944, and the full complex of 25 gun tubes by 1 October 1944. Following a failure at the Misdroy proving ground in April 1944 after only 25 rounds had been fired, the project was further cut back, from five drifts to three even though work had begun on some of the other drifts. The site was finally put out of commission on 6 July 1944, when bombers of RAF Bomber Command's 617 Squadron (the famous "Dambusters") attacked using 5,400-kilogram (12,000 lb) "Tallboy" deep-penetration bombs.

For the bombing of, and Allied intelligence regarding, this site, see Bombing of Mimoyecques during World War II. 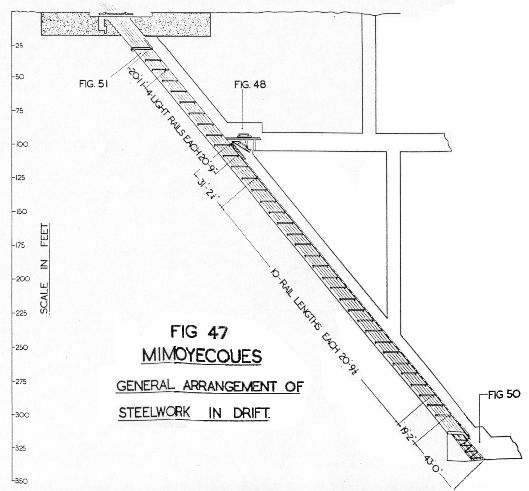 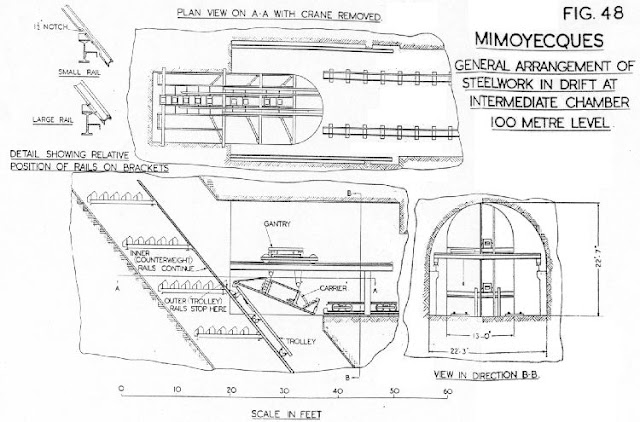 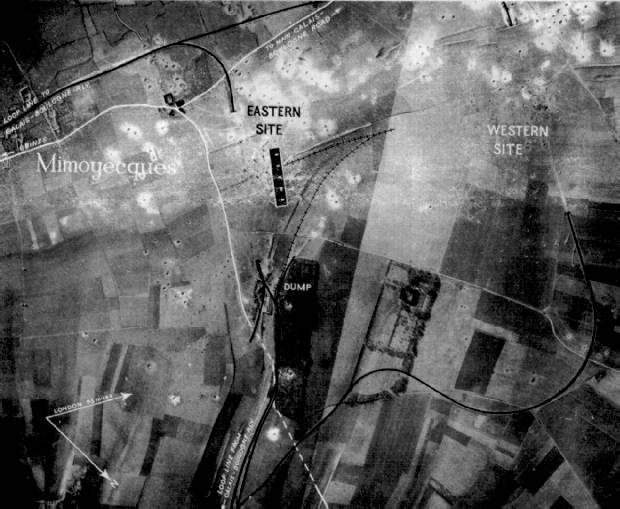 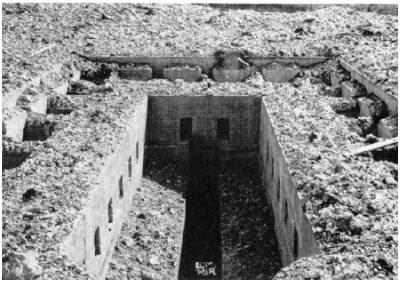 The project eventually came under the control of the SS and SS General Hans Kammler ordered the project to be ready for action in late 1944. Assisted by Walter Dornberger, a battery of two shorter guns approximately 50 metres (160 ft) long with 12 sidechambers were constructed and placed in the hands of the army artillery unit Artillerie Abteilung 705 under the command of Hauptmann (Captain) Patzig. These were sited in a wooded ravine of the Ruwer River at Lampaden about 13 kilometres (8.1 mi) southeast of Trier in Germany.
The two guns were aimed west, resting on 13 steel support structures on solid wooden bases on a 34 degree slope. The city of Luxembourg (which had been liberated in September 1944) was at a range of about 43 kilometres (27 mi) and was designated Target No. 305. Between the two gun tubes concrete blockhouses were constructed as well as ten smaller bunkers to hold projectiles and propellant charges.
The assembly and mounting of the Lampaden guns coincided with the final preparations for the Battle of the Bulge. However, the supply of ammunition became problematic due to the state of the German railway network. As time had become critical, it was decided to use a 150-millimetre (5.9 in) finned projectile with a discarding sabot, weighing 95 kilograms (210 lb) and carrying a 7–9 kg (15–20 lb) explosive charge. The propellant comprised a 5 kg (11 lb) main charge and 24 subsidiary charges for a total of 73 kg (160 lb).
By the time the Ardennes offensive began on 16 December 1944, Kammler received orders from OB West (German Army Command in the West) to begin firing at the end of the month and on 30 December 1944 the first gun tube was ready for action. Two warm up rounds were initially fired, followed by five high-explosive shells which were fired in sequence, attended by Kammler. The muzzle velocity was approximately 935 metres per second (3,070 ft/s).
The second gun tube was brought into operation on 11 January 1945 and in total some 183 rounds were fired until 22 February 1945, with 44 confirmed hits in the urban area. The guns were not particularly effective; of the 142 rounds that impacted Luxembourg, total casualties were 10 dead and 35 wounded. One gun was dismantled on February 15,[ and firing ceased on 22 February, when US Army units had advanced to within 3 kilometres (1.9 mi) of the Lampaden site.

A second battery of guns began to be deployed in January 1945 at Buhl, aimed at Belfort in support of the Operation Nordwind offensive. One gun was erected before the failure of the Nordwind offensive put the site at risk, and the equipment was removed before firing could begin.
There were other proposals to deploy batteries to bombard Antwerp and other cities but these were not implemented due to the poor state of the German railway network and a lack of ammunition. All four HDP guns were eventually abandoned at the Röchling works in Wetzlar and Artillerie Abteilung 705 was re-equipped with conventional artillery. The disassembled gun tubes, spare parts, and remaining ammunition were later captured by the US Army and shipped to the United States where they were tested and evaluated at the Aberdeen Proving Ground, Maryland, where they were finally scrapped in 1948.

The Mimoyecques museum allows visitors to view the galleries (in various stages of construction and bombing damage), remains of the guns, a small scale V-3 replica, and examples of machinery, rail systems and tools employed. The site also contains memorials to the slave-laborers who were employed by the Nazis to construct it, alongside memorials to the airmen lost in action during the destruction of the base.
The Miedzyzdroje site also has a museum. 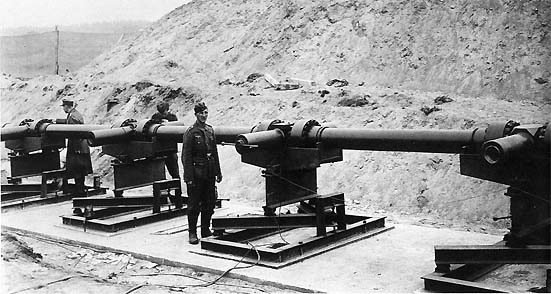